Staring out into space.

Wondering if I’m glad to be home.

And wondering how to snap out of vacation-mode and get back to real life.

Yesterday, my son and I endured a time-warp kind of day in the hands of the airlines, starting in Idaho Falls, then Denver, then Charlotte, then eventually Albany, where tired and dazed, we collected our 100+ collective pounds of suitcases and bags, and stepped into the Albany Park and Fly van, where the driver eventually brought us to our car.

Oh great, another hour and a half of driving to go. We hadn’t eaten anything but a few snacks all day. I mentioned in some of my other posts my son has a peanut allergy. When leaving the house for a trip, we always pack a supply of safe foods in a bag to ensure he has something safe to eat along the way. But on our way home, we didn’t have the time to replenish, and just had a few snacks left, and after a week of dragging around the same granola, crackers and dried fruit, neither of us were interested in eating them. I doubt any of you have noticed this, because you don’t have to worry about food allergies, but every restaurant in every airport has a sign that says basically if you are allergic to anything, we have it in our facility so eat at your own risk! So we keep airport-restaurant eating to a minimum, picking up a Greek yogurt if we can find it, and that’s about it.

Once in the car, we headed north on 87, through Saratoga Springs, and then over to Washington County. Around a half hour from our house,  Brett finally looked up and complained he was dying of hunger.  He had been such a great kid all day. Barely eating anything and not really caring. I had been surprised; he’s not typically shy about whining when he needs something. But at the moment, there was nowhere to stop, so I rummaged through my snack bag and eventually pulled out a piece of provolone cheese.

It looked ok. I had packed it before I left and usually cheese is ok for awhile outside the refrigerator, right? I had been munching on some cheddar a few minutes before and it tasted good.

But then: Sudden scream from the backseat.

“The cheese went bad Mom!! My stomach is killllling meeee!”

Oh come on,  really?  I have just spent 14 hours traveling, carrying bag after bag, one on each side of me and around my neck, plus a booster seat, so if I was unbalanced in any way, I would have toppled over. And I spend all day every day of my life, and especially on vacation, trying to keep this kid safe from peanuts and nuts when we eat outside the home. And then he keels over from bad cheese?

He continued to moan, flailing around in his seat for the next few minutes. The realization: this might be serious.

Did I really just poison my son?

I had been blasting Steve Earle’s Burnin’ it Down before that, visualizing Steve burning down a Wal Mart in a town pretty similar to the one I was driving through, but had to turn him off. Brett’s eyes were closing. He leaned over into the middle console. Should I stop and make him get out? Well, if I can make sure to hear his breathing, that works.

I listened to him breathe as I drove.

And all these horrible scenarios played out in my head about what would happen if he wasn’t ok. And what I would do.

An ominous welcome home to VT

About 10 minutes from my house, along Vermont Route 30. The sky darkened and rain started hammering the windshield. Is this a sign? Should I have stayed on vacation?

We finally reached the house at around 9pm; I woke Brett and wrestled him out of the car. He perked back up within a few minutes. Whew, sigh of relief! I pushed through the front door, leaving the car doors open and all the bags still out on the driveway, and headed immediately to the refrigerator. Having been away for the past week, the fridge had been empty and sad, but I saw some eggs, and made us a few omelets. Brett was so hungry, he ate two of them, and since we were still on mountain time, we stayed up late snuggling, talking about our trip, and making up for lost time with the pets in the house who all needed a little care. 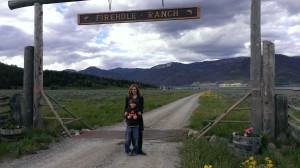 Aside from the drama on the way home, this has been an amazing week. As soon as school ended on the 13th, we took a day to pack, and then flew out to Montana, staying at Firehole Ranch, on Hebgen Lake, and visited Yellowstone National Park. My husband was there too; he stayed for a few extra days, so had to miss the dramatic drive home. In Montana, I had one day of fly fishing with an amazing guide and now feel like I finally could do this myself. We had no access to internet. Maybe one bar of cell service; enough to send a text in certain rooms of the house, or check email, but that’s about it. I’m feeling completely out of touch with everything.

With my exercise agenda. With foods. Oh, the foods from this week! I can’t even begin to tell you what we ate, and I tried to keep up on activity with walks and some exercises out on the cabin deck, but as my heart rate monitor would display at the end of the week, it was an “incomplete training week” at best.

This morning the jeans are tight. I’m still craving desserts and wine.

But I’m looking out the window now and it’s beautiful here in Vermont too.  I needed that break from civilization and media and devices. And I wouldn’t admit it before, but the break from fitness and schedules and balanced eating was kind of nice too.

It was a tiring and stressful journey yesterday to get here, and we are both still in a zombie-like state of mind, but we are both safe.

Maybe it is indeed good to be home.

For the next few days Brett and I will stay on mountain time, and gradually re-emerge from vacation-mode to home-mode in a more focused way, but not today, tomorrow sounds about right…